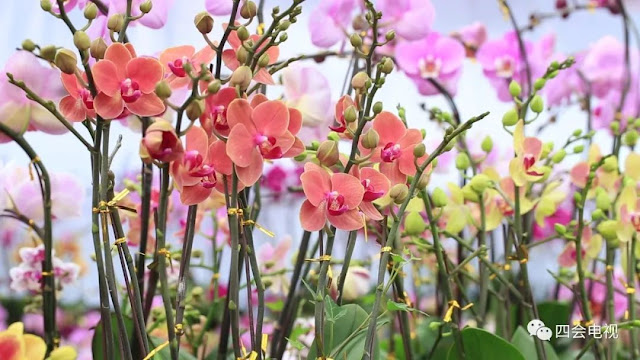 At the opening ceremony, Shigou Town held a licensing ceremony for the professional town of "One Village, One Product, One Town, One Industry" in Guangdong Province, held the unveiling ceremony of the orchid market, and carried out the "Most Beautiful Orchid" evaluation and award activities. During the ceremony, local original literary and artistic programs such as "Orchid Dance" were interspersed with performances.

Orchid culture and tourism atmosphere is strong, and industrial construction is on a new stage 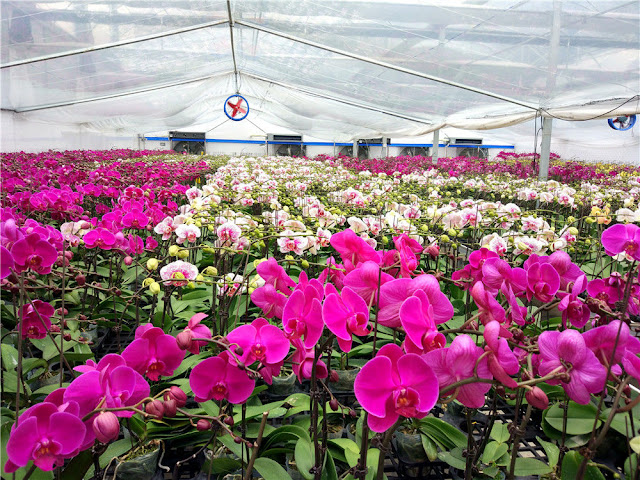 This year is the second "Orchid Tourism Culture Festival" held in Shigou Town. On the newly established "Orchid Market", many surrounding farmers set up stalls for the exhibition and sale of characteristic agricultural products such as camellia, citrus, cinnamon, bamboo civet, and Roche shrimp. Of course, there is also the "leading role" of the orchid booth, which is a feast of orchids.

What is more brilliant than orchids is the smile of orchid growers. In recent years, Shigou Town has followed the strategic layout of "one core, one axis and one corridor" of the Sihui Municipal Party Committee and the municipal government, and its development orientation of "building a town through agriculture, strengthening tourism, and prospering e-commerce". With the orchid industry as the focus, it has embarked on a path of rural revitalization with local characteristics.

The large-scale planting of orchids in Shigou Town has a history of more than ten years. According to statistics, there are 62 orchid enterprises in Shigou Town, with a planting area of 4230 mu. There are 33 million seedlings of orchids annually, including about 230 species of national orchids, hybrid orchids and foreign orchids. The output value from 2018 to 2019 will reach 300 million yuan.

After winning the title of "Guangdong Orchid Professional Town" in 2018, Shigou Town won the title of "One Village, One Product, One Town, One Industry" in 2019, which is the only selected town in Sihui City. The development of orchid industry has reached a new level.

Lai Guofei, a member of the Party Committee of Shigou Town, said that Shigou Town will take this orchid tourism and cultural festival as an opportunity to consolidate the orchid industry, build an orchid market, show the achievements of Shigou Town's "one village, one product, one town, one industry" and new rural construction, and drive the development of flowers, tourism and catering industries. Next, Shigou Town will take the orchid industry as the core support, integrate the resources on both banks of Suijiang River, and build an orchid featured town suitable for living, creating, working and traveling.

The "Orchid Tourism Culture Festival" has brought popularity to Shigou Town, and the orchid industry has also made farmers' money bags more and more popular. For Diao Mulian, a poor household in Cheng Village, Shigou Town, this orchid is a "golden flower and silver flower" on the way out of poverty.

Diao Mulian, 35, is a low-income family member of the Lion Villagers' Group in Cheng Village. She has a son and a daughter who are studying in school. She has two elderly people to take care of. She can only earn a small income from working as a household farmer for a long time. At the end of 2019, Diao Mulian's family received more than 5000 yuan of poverty relief income. For this poor family, this is undoubtedly a timely help.

Shigou Town Orchid Industry Poverty Alleviation Demonstration Base is located next to the Wuyi Mountain Pond of Cheng Village, covering an area of 60 mu. It is mainly planted with Guolan, Sijilan and hybrid orchid, with an annual seedling production of 300000 pots and an annual output value of more than 6 million yuan.

Pan Qiming said that by adopting the business model of "company+base+poor households", the demonstration base for poverty alleviation of the orchid industry in Shigou Town has implemented six benefit linking mechanisms, including "dividends for capital investment, land rent for land transfer, remuneration for base work, benefits for trusteeship management, skills for free training, and income for driving planting", to ensure that poor households have stable and sustainable income.

In addition to the poverty relief income, Diao Mulian has been working in Yalan Fangwu since June 2019, with an average monthly labor income of about 2500 yuan. The 0.4 mu of land shared by Diaomlian's family will also be transferred intensively to Yalanfang in 2019, which will bring rent income of 1100 yuan/mu for Diaomlian's family each year. The government also subsidizes Diao Mulian's family with a minimum living allowance of about 1200 yuan per month. Diao Mulian said that life is getting better every day.

The above aid model has been gradually promoted in Shigou Town. Recently, Cheng Village plans to invest 500000 yuan of provincial special funds in the local Zhaoqing Wanlvxing Flower Planting Co., Ltd., and the expected annual income is 10% - 15% of the total investment, so as to expand the village's collective economic income. Ling Junjie, the person in charge of Zhaoqing Wanlvxing Flower Planting Co., Ltd., said that at present, the company has nearly 10 poor households coming to work, with a minimum income of 90 yuan per day.