Released at the 4th National Congress  in Guangdong

On the flagship store of an e-commerce platform,

At the Fourth Zhaoqing Conference,

Its 288 mu production base has begun to take shape,

The first phase will be completed at the end of the year,

The second phase will be completed in October next year.

The manufacturing base and headquarters project of the high-end beauty industry chain of Guangzhou Oubo Group is located in Xiamao Town, Sihui City. Sihui City is committed to developing the skin care industry, which is the first leading project introduced. The total investment of the project is 1.5 billion yuan. It is mainly to build a daily chemical production area, a packaging material area, a logistics area, a research and development center, and a sales exhibition center. It is estimated that the project will achieve an annual output value of 3 billion yuan and a tax of 150 million yuan after completion. It will become a leading research, development, production, and e-commerce base for high-end beauty products.

A few days ago, the reporter saw at the project construction site that under the scorching sun, the workers were sweating and busy operating the tower, pile driver, mixer, excavator, transport vehicle, etc. According to the person in charge of the project, the project will be constructed in two phases. The construction of the first phase, which covers an area of 188 mu, started in February this year. At present, the concrete pouring of three storey columns and four storey beams and slabs in the first phase of the office building has been completed, and the formwork support of five storey beams and slabs is being erected. It is planned to complete the capping of the main body this month; The construction progress of several plants is considerable, and the pile pressing of the dormitory building and boiler room has been completed. It is planned to cap all plants before the end of the year, and strive for small-scale trial production within the year. Phase II was started in June this year. At present, two static compressors have started to build pile foundations for three plants in the south. It is planned to complete the phase II pile foundations in the middle of June, and the roads around the plant in the west have been hardened. 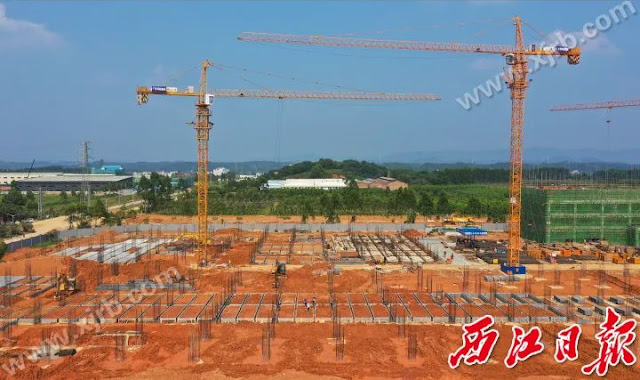 The reporter learned that the manufacturing base and headquarters project of the high-end beauty industry chain of Guangzhou Oubo Group was invested and constructed by Xingfu Biotechnology (Guangdong) Co., Ltd. The company has cosmetics companies, packaging materials companies and injection molding companies. It integrates product research and development, production and sales, and is equipped with automatic production equipment such as automatic canning production lines. It has many well-known brand products, and has established an online e-commerce platform and a nationwide agency and distribution network.

In recent years, domestic skin care products have become more and more popular, and domestic enterprises related to skin care products have grown rapidly. The Fourth Meeting will seize the opportunity to develop the skin care industry and plan industrial clusters. Oubo Group is the first leading project of skin care products. The Fourth National Congress guaranteed its smooth construction with high-quality services, including giving priority to its land supply. "In terms of project land, government departments at all levels have helped us solve many problems. Since the signing of the contract last year, our project has progressed faster than expected, which has greatly promoted the realization of our on-time production plan." Mr. Xiong, the project leader, told reporters. In addition, the Sihui Municipal Government has opened up several "green channels" for the project, and has speeded up the handling of the project construction procedures, construction of supporting facilities at the construction site, and the whole process of service in the underground town where the project is located.

The reporter learned from the Investment Promotion Center of Sihui City that Sihui actively planned to attract upstream and downstream enterprises to settle down with the Oubo Group as the leader. With the cooperation of the government and enterprises, 10 relevant enterprises have settled in the park, including cosmetics packaging materials, raw materials, end products and other enterprises. The person in charge of the Investment Promotion Center said that the relevant enterprises are partners of the Oubo Group. The reason for choosing the four meetings is the urgent need to expand production, and the location and cost advantages of the four meetings. In order to serve these enterprises well, Sihui arranged special classes to maintain close communication.

Xiamao Town is located in the middle of Sihui City,

Close to the urban area, with complete industrial facilities,

There are complete upstream chemical enterprises to provide supporting facilities,

The Fourth National Congress plans to build Xiamao Town into

According to the above responsible person,

In addition to OBO Group, 1000 mu of land will be allocated,

Create a cosmetics production base,

At present, a number of manufacturing projects are under discussion,

They are all small and cost-effective projects,

At present, relevant enterprises have a strong desire to land,

The Fourth Meeting will provide good service and strive for it.