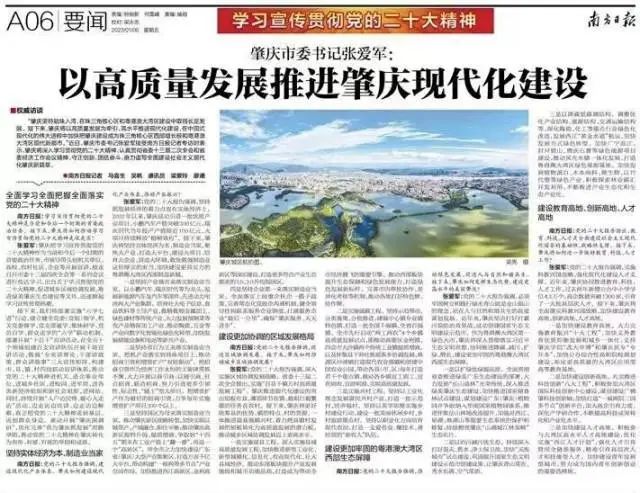 Next, we will deploy and implement the "six learning and seven advancement" action, establish and improve the "six learning" linkage mechanism of the Party committee (Party group) leading the learning, the organ Party committee supervising the learning, the Party branch learning all over, collective research, party members self-study, and the masses sending the learning, deploy and carry out the "100 thousand" preaching activities, and establish 100 preaching teams in 10 areas of the city to carry out 1000 preaching activities, We will strengthen the three publicity matrices of "experts tell theories, cadres tell policies, and the masses tell stories", build a four level linkage publicity system at the city, county, town, and village levels, and promote the spirit of the Party's twenty major conferences to enter the organs, enterprises and institutions, urban and rural communities, schools, military camps, various new economic organizations, new social organizations, and websites. At the same time, we continued to carry out the activity of "visiting the people at home and making warm visits", preaching and solving problems while visiting, and really sent the spirit of the 20th CPC National Congress to the grassroots and the masses. We will carry out "deep investigation in Zhaoqing" on a rolling basis, optimize and improve the "I focus on development for Zhaoqing" approach, and promote the transformation of the spirit of the 20th CPC National Congress into tangible, meaningful and effective measures and results in Zhaoqing. 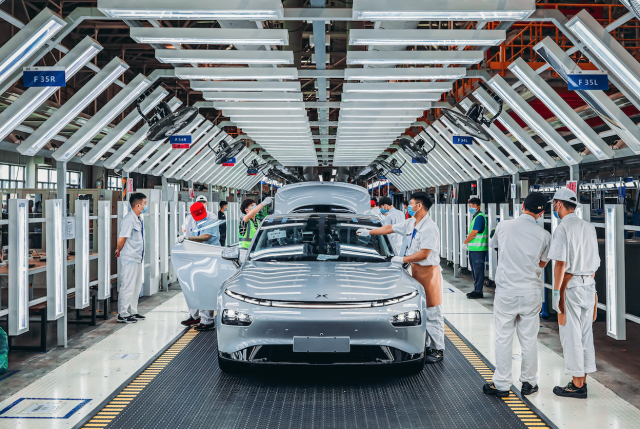 Zhang Aijun: The report of the 20th National Congress of the Communist Party of China emphasized that we should focus on the real economy. Since 2022, Zhaoqing has successfully introduced a number of high-quality industrial projects. The output value of Xiaopeng Automobile has exceeded 30 billion yuan. The output value of Ruiqing era in that year was close to 10 billion yuan. Large projects continue to release the "banyan effect". Next, Zhaoqing will adhere to the real economy as the foundation and the manufacturing industry as the leader, focus on large industries, build large platforms, build large projects, cultivate large enterprises, and create a large environment, and make itself a solid property of forced manufacturing, so as to accelerate the construction of a more powerful manufacturing new town in the western Guangdong Hong Kong Macao Greater Bay Area.

First, adhere to the principle of strengthening the industry to implement the leadership of the manufacturing industry. Led by Xiaopeng Automobile and Ruiqing Times, we will develop two industrial clusters of new energy vehicles, auto parts and advanced power batteries. We will foster and expand leading industries such as electronic information and food and beverage, refine traditional industries such as fine metal processing and green building materials, vigorously develop intensive and deep processing industries of agricultural products such as prefabricated vegetables, promote the transformation of ceramics, hardware and other industries to digital, intelligent and green, and accelerate the development of emerging industries such as energy storage equipment and power stations.

Third, adhere to the principle of taking the park as the mother to implement the leadership of the manufacturing industry. Promote the strategic transformation of Zhaoqing New Area, and accelerate the realization of city driven production, industry city integration, and balance between work and housing; We will promote the upgrading, quality and efficiency improvement of Zhaoqing High tech Zone, and strive to "double" the industrial output value by the end of the "Fourteenth Five Year Plan" and rebuild a "High tech Zone". With the strength of the whole city, we will accelerate the construction of a large industrial cluster in Guangdong Province (Zhaoqing), create a platform covering an area of ten thousand mu and one hundred billion yuan, and drive the construction of an industrial spatial layout of "one core, two belts, and multiple nodes". Accelerate the construction of Xijiang High tech Zone, Jinli High tech Zone and other parks, and create more 2.0 and 3.0 upgraded parks that meet the requirements of industrial ecology.

Zhang Aijun: The report of the Twentieth National Congress of the Communist Party of China emphasized that we should thoroughly implement the strategy of coordinated regional development. The second plenary session of the 13th provincial party committee proposed to implement the "high-quality development project of 100 counties, 1000 towns and 10000 villages". The outstanding weaknesses of Zhaoqing's modernization drive lie in the counties, the weak links lie in the towns, and the most arduous and arduous tasks lie in the countryside. Next, Zhaoqing will better balance the advantages of the county, the characteristics of the town, and the resources of the village, promote the prosperity of the county and the prosperity of the village, and strive to transform the short board of the county, town, and village development into the potential board of high-quality development, so as to promote the coordinated development of urban and rural areas and regions to a higher level.

First, implement the Fuxian County Project. We will deepen the implementation of high-quality county development projects, accelerate new industrialization, new urbanization, informatization, and agricultural modernization, and strengthen the county economy. Promote the eastern sector to improve the level of industrial development and the quality of urban functions, and create an important engine to drive the city's economic take-off. We will promote the western region to improve its ecological security and green development capabilities, and create a new benchmark for green development. We will improve the mechanisms of assistance, cooperation, and differentiated assessment in the city, and promote all regions to play a good role in the brand of characteristics and cooperation.

Second, implement the strong town project. Adhere to the principle of demonstration and promotion, implement policies by category and promote in batches, and build a group of national top 1000 towns and provincial top 100 towns. The city first launched four high-quality development pilots of "two industries and two agriculture" towns, that is, to promote the improvement of quality and efficiency of two traditional industrial towns, namely Jinli Town in Gaoyao District and Dasha Town in Sihui City, as well as the coordinated development of Xiashuai Zhuang and Yao Township in Huaiji County, Shapu Town in Dinghu District to build a strong modern agricultural town and a Chinese agricultural park, so as to drive each county (city, district) to build several key towns every year, and promote each township to work while working while farming while traveling while traveling, Achieve high-quality development.

Third, implement the village rejuvenation project. Adhere to the concept of industrialization to develop the industry of enriching people and prospering villages, and build a number of demonstration villages and economically strong villages. Insist on carrying out rural construction with aesthetic thinking, and build a number of beautiful leisure villages and key villages for rural tourism. Adhere to cultivating modern farmers in the direction of professionalism, and build a team of "new farmers" who love agriculture, know technology and are good at management. 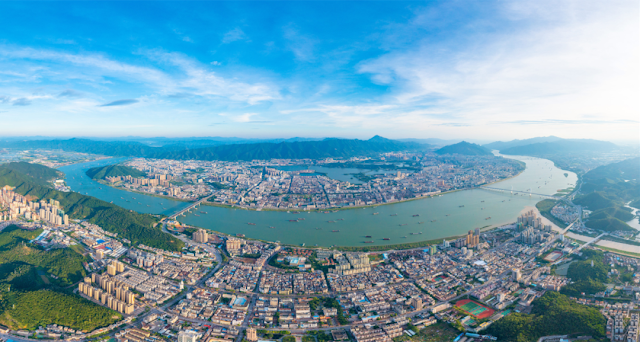 Nanfang Daily: The report of the 20th National Congress of the Communist Party of China emphasized that we should promote green development and promote the harmonious coexistence of man and nature. Next, how can Zhaoqing give play to its ecological advantages to build a higher level of beautiful Zhaoqing?

Zhang Aijun: The report of the 20th National Congress of the Communist Party of China emphasized that we must firmly establish and practice the idea that green water and green mountains are golden mountains and silver mountains, and plan for development at the height of harmonious coexistence between man and nature. In recent years, Zhaoqing has firmly fought to win the battle against pollution and successfully established a national demonstration city for ecological civilization construction.

The second is to control pollution, reduce pollution and improve ecology. We will continue to work hard to defend the blue sky, clear water and pure land, accelerate the pilot construction of "waste free city", consolidate and improve the achievements of building a national ecological civilization demonstration city, and make Zhaoqing's green mountains, beautiful water and air always fresh.

The third is to adjust the structure by reducing carbon. Adjust and optimize the industrial structure, energy structure, transportation structure, deepen the green transformation of key industries such as ceramics and chemical industry, develop the "golden waterway" shipping of Xijiang River, and accelerate the green transformation of the development mode. Accelerate the construction of green energy projects such as Guangning Langjiang, Fengkai Dangshan and Deqing Shicao, promote the integrated development of scenery, water and storage, and build a green energy base in the Guangdong Hong Kong Macao Greater Bay Area. Accelerate the development of green industries such as plant protein, woody oil plants, microorganisms, bamboo instead of plastic, actively explore the development and utilization of forestry carbon sinks, and constantly promote industrial ecology and ecological industrialization.

Build a highland of education, innovation and talents

First, accelerate the construction of education highlands. We will vigorously implement the "ten major projects" for the revitalization of education, speed up the high-quality and balanced development of compulsory education and urban-rural integration, support Zhaoqing University's "application for Expo" and Zhaoqing Medical College's "upgrading from junior college to undergraduate", speed up the planning and construction of public comprehensive vocational colleges, and form a higher quality Dawan District application-oriented higher education base.

Second, accelerate the construction of innovation highland. We will steadily promote the "eight major projects" of scientific and technological innovation, actively participate in the construction of the Dawan District International Science and Technology Innovation Center, plan to build the Guangfo Zhaoming Science and Technology Innovation Axis, accelerate the creation of an innovation platform of "one city, two hospitals, three parks, and multiple nodes", increase the efforts to introduce high-tech enterprises, deepen industry university research cooperation, and constantly improve the transformation and industrialization of scientific and technological achievements.